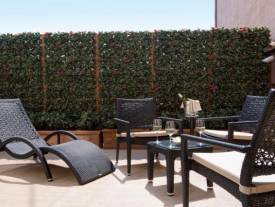 Here are a few tips about what's on in Rome in July.

Find out what's on in Rome in July!

For culture hounds, throughout July (and August), the Vatican Museums are open every Friday evening until 11:00 pm. And there's a new option: visitors can enjoy a buffet in the enchanting surroundings of the Courtyard of the "Pigna" (Pinecone). Not only are the special night openings back, the Music of the Museums festival is putting on a wide array of concerts.

Fans of American superstars Beyoncé and her husband Jay-Z are waiting with baited breath for their show the Olympic Stadium. Sunday, July 8, their live OTR II TOUR 2018 will hit the stage.

The “Roman Nights at the Teatro di Marcello” is chock full of classical music concerts. A concert is put every evening at 8:30 pm, preceded by a short, guided tour of the archaeological area at 7:45 pm.

In early July, the summer music season kicks off at the Casa del Jazz with the "Rome Jazz Festival" and outdoor concerts in the Villa Oslo.

For film buffs: movies continue to be shown on Tiberina Island, now joined by free movies in Trastevere and at Villa Borghese.

Summers along the Tiber River is for perusing market stalls, having a drink, watching a musical or a dance, or catching an exhibition. For info: http://www.lungoiltevereroma.it/

Opera lovers take note: La Traviata” is at the Baths of Caracalla with various dates throughout July. And in the same romantic setting, classical ballet fans shouldn't miss "Roberto Bolle and Friends" and "Romeo and Juliet."

Between July 14 and August 11, evenings full of music are slated at the Courtyard of Sant'ivo alla Sapienza, with the Orchestra of the International Chamber Ensemble foraying into musical works by Vivaldi, Mozart, and Verdi.

If you have kids, consider Time Elevator Rome, a time machine that takes you back through Rome's history: the legend of Romulus and Remus, Julius Caesar's assassination, Nero, and Michelangelo when he painted the Sistine Chapel...